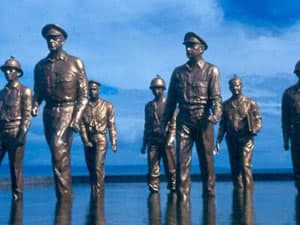 Moving on to Clark, we visit the Clark Museum and Stotsenburg parade ground. Japan's bombing of Clark Air Base in 1941 signaled the start of WWII in The Philippines. We also take time to reflect at the Capas Memorial Shrine. From San Fernando Train Station prisoners were forced to ride to Camp O’Donnell in Capas, Tarlac, serving as the last station of the 1942 Death March.

We visit the Bataan Museum and Surrender Site Monument, then to the Zero Kilometer Death March Marker, continuing to Pilar, stopping at the "Battle of the Pockets Marker" and the Pantingan River. We drive by Bagac's Bell Tower, which is now a symbol to peace and reconciliation between Japan and Philippines.

Mt Samat Shrine is a historical shrine, consisting of a Colonnade and a large Memorial Cross, located near the summit of Mount Samat. This park was commissioned by then President Ferdinand Marcos in 1966 for the WWII 25th anniversary and to act as a remembrance to the soldiers who fought and lost their lives in the Battle of Bataan.

At Mt Samat War Museum the display includes a collection of pictures and paintings of Philippine heroes, as well as armaments used by the Filipino, USA and Japanese battle forces.

On this tour we also take a cruise to Corregidor Island, colloquially also known as "the rock". This island situated in the entrance to Manila Bay played a major part in World War II, and was the nerve center and base for the US during the War. Here, a handful of Filipino and American soldiers formed a resistance against the fury of the Japanese onslaught.

This tour is planned to your requirements and dates, and can be extended to include other areas of the Philippines such as Leyte. Often, guests who request a WWII Tour of the Philippines have past family members who have been involved in conflicts which involved the Philippines, and wish to retrace their ancestors' steps. We endeavour to tailor these private tours to include as much as is especially personal and relevant to each party. Simply let us know.

We will arrange your World War II tour, including accommodation and local excursions. Travel is by private car, or bus, depending on the size of your party, and this tour can be combined with a wider holiday. Contact us to request this.

Philippine Trails Ltd is a registered member of the Travel Trust Association.

This means that clients can book their Philippines Holidays comfortable in the knowledge that the Travel Trust Association will protect them in the unlikely event of the company becoming insolvent.