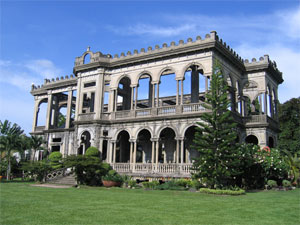 At first view he stark image of these Ruins is quite breathtaking. A ten bedroom Italianate mansion, it was originally built in the early 20th century by a sugar baron, Don Mariano Ledesma Lacson, in memory of his wife, who had died during the pregnancy of his 11th child.

The building was intentionally set on fire during WWII by Filipino guerrillas to prevent Japanese forces from being able to use it as their headquarters.

Burnt out, the walls and foundation remained solid, and today the ruins are a picturesque destination for visiting tourists, and is listed as among the World's 12 most fascinating ruins 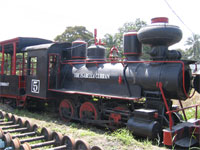 Steam train from the sugar plantations 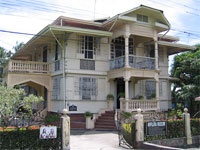 Negros Occidental occupies the northwestern half of Negros Island, (Negros Oriental being the southeastern half), and its capital is Bacolod City. 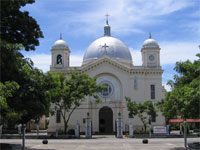 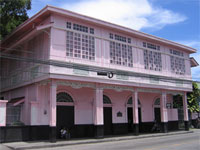 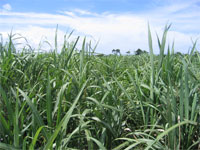 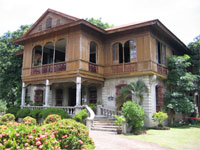 Known as the "Sugarbowl of the Philippines", Negros Occidental produces more than half the country's sugar output.

The wealth created by the sugar industry ensured that the Negrense noble class enjoyed the very best, and the region is rich in structures and buildings that are remnants of a once affluent lifestyle.

Steam locomotives that used to transport sugarcane from the fields to refineries today attract steam train enthusiasts from all over the world. (We can arrange for a steam locomotive to be prepared and fired up for you and your group to experience - please enquire if this is of interest.)

Known as the “Paris of Negros”, Silay City is famous for its 29 well-preserved ancestral houses. It is the second Philippine city to have been declared a museum city, (the other being Vigan in Ilocos Sur).

Victor Gaston Ancestral House, known also as the Balay Negrense, is a museum in Silay City. The house is a wonderful collection of furniture and artefacts showing the life of a late 19th-century Negrense sugar baron, and was the first museum to be established in the province.

The Gaston family were pioneers in the cultivation of sugarcane in this part of the Philippines. Yves Leopold Germain Gaston had arrived from Normandy, France, and had married a Filipina from Batangas.

The house, still occupied by its owner, has all the typical features of a Spanish residence. As well as having numerous artefacts on display, there are three rooms full of paintings and drawings by famous Filipino masters.

Designed by Italian architect, Antonio Bernasconi, San Diego Pro-Cathedral was built in 1920, and is the only pro-cathedral outside of Manila. It has a dome that resembles St. Peter’s Basilica in Rome.

The Bernardino Jalandoni Ancestral House, also known as the “The Pink House”, is one of the biggest ancestral houses in Silay. It was the first heritage house to be opened in Silay City.