Malacañang of the North, Ilocos, Philippines 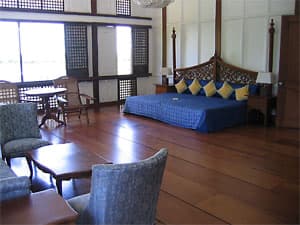 Malacanang of the North, master bedroom

Malacañang of the North, & the Marcos Family

In Ilocos Norte, can be found the Malacañang of the North, (or Malacañang ti Amianan, as the locals refer to it), which is a rather grand mansion, in beautiful grounds, overlooking a lake. 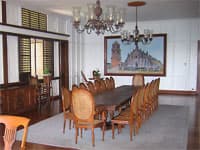 State room, Malacañang of the North 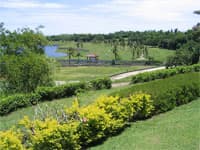 Malacañang of the North grounds and lake 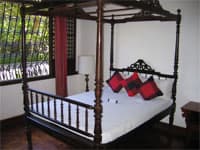 One of the Malacañang of the North's many bedrooms

This was a birthday gift from first lady, Imelda Marcos, to her husband on the occasion of his 60th birthday. (It is named after the official residence and workplace of the President of the Philippines in Manila - the Malacañang Palace.) The house and gardens are a feature on our Ilocos tours.

It is among a number of properties belonging to the Marcos family which were sequestered by the Philippine Government when President Marcos was removed from power.

Enquire Now for Tour to Ilocos and Malacñang Palace

After 20 years of ownership by the government, the property was eventually given back to the jurisdiction of Ilocos Norte. Restorations and renovations were commenced by the region's Governor, and in 2011 the property and grounds were opened up to the public as a museum.

The House and Grounds

With its sprawling expanse, this imposing mansion is intricately designed and has a mix of Spanish and Ilocano architecture. The result is quite majestic, and one of its finest features is the magnificent view, with the house looking out over well tended gardens and the beautiful Paoay Lake.

A visit to the Malacañang of the North is a rare opportunity to take a look and experience the life and grandeur of one of the most influential families the Philippines has ever known.

The Marcos family was considered the "royal family" of the Marcos Era and they built many houses and retreats around the country. Malacañang of the North became their official residence in Ilocos Norte, and indeed, Ferdinand Marcos is probably the region's most famous son. He was the Philippines President between 1965 and 1986. Despite his infamous reputation and government, he was instrumental in helping to shape what the Philippines is today.

Imelda Marcos was a local singer and model in Manila before meeting her husband. She is famously remembered for her collection of more than a thousand pairs of shoes, which came to symbolise her families alledged excesses during their twenty year rule.

While in power, the Marcos administration was accused of large scale authoritarian corruption, political repression, nepotism, and human rights violations, and after the assassination of a primary political opponent, Benigno Aquino, Jr., in 1983, public outrage led to the famous People Power Revolution in February 1986. Marcos was forced from power and he fled, seeking exile in Hawaii.

The Marcos Museum is situated in the heart of Batac City, Ilocos Norte. The museum shows various memorabilia, from his time serving in the armed forces right up to his presidency. An adjoining mausoleum once contained a glass coffin in which Marcos' embalmed body lay on public display after his remains were brought home to the Philippines in 1993.

Enquire Now for a Tour to Ilocos and Malacñang Palace