"We owe you a big thank you for the organisation and selection of locations for us of what was an excellent holiday." More testimonials... 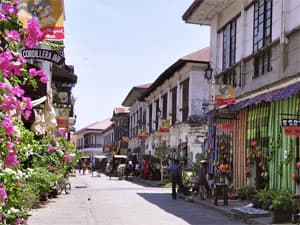 Vigan and Ilocos - its Spanish Heritage

The Spanish arrived in the 16th century and made efforts to convert the local population to the Roman Catholic Church.

Present-day Vigan City in Ilocos Sur became the bishopric seat of Nueva Segovia. Ilocanos in the northern parts were less easily swayed, however, and remained an area filled with deep resentments against Spain.

These resentments bubbled to the surface at various points in the Ilocos provinces' history with sevaral insurrections. Paoay Church,

Laoag City is the provincial capital of Ilocos Norte, and can be accessed by air from Manila. Many tourists visit Laoag to explore its heritage sites featuring Spanish colonial buildings, Philippine-baroque churches, and Marcos-era mansions.

Laoag has been recently adjudged as the number one tourist destination in the region, and amongst the top ten in the whole archipelago. 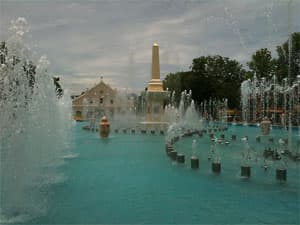 The dancing fountains of Vigan. 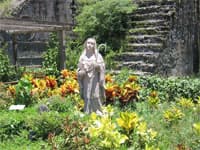 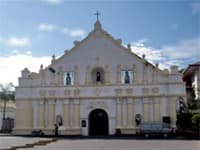 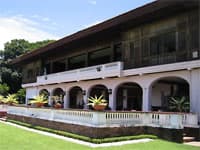 Malacañang of the North.

Ilocos is a fascinating region for tourists to explore. It collectively refers to two provinces in the northern region of the Philippines' main island, Luzon - Ilocos Sur and Ilocos Norte. Inhabitants are called Ilocanos.

There are fine sandy beaches stretching along La Union, just to the south of Ilocos Sur's boundary, and also at Pagudpud, at the very north of Ilocos Norte, with opportunities to enjoy water sports and various other activities. The region is rich in crafts, and is famous for blanket-weaving and pottery. The Ilocanos' burnay pottery is well known for its dark coloured clay.

Many of our Tour Suggestions include Ilocos. 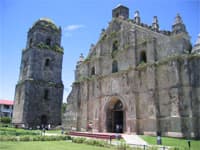 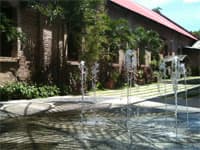 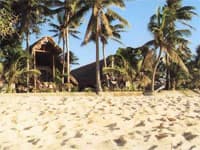 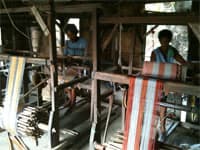 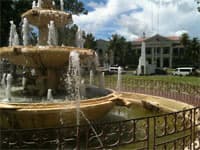 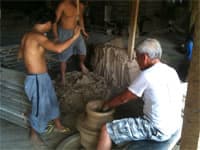 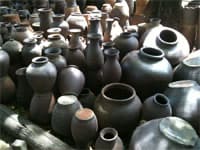 Vigan is a UNESCO World Heritage Site about 400 kilometers north of Manila on the west coast of Luzon, and is the capital city of Ilocos Sur.

In pre-colonial times, Vigan was an important trading post for Chinese junks, trading gold beeswax and other products from the central Cordilleras for exotic Asian goods.

Vigan is the oldest and best-preserved example of a planned Spanish colonial town in Asia, and it has a unique European atmosphere. A reminder of the colonial days are the calesa horse-drawn carriages that still meander through Vigan's streets.

The sinking bell tower is one of Laoag City’s most famous landmarks, and is the tallest and most solid bell tower in the Philippines. It was built by the Augustinians in 1612. The tower is sinking as it's so heavy, having been built on foundations of soft sand. It is said that a man was once able to ride on horseback into the tower. Nowadays a person has to bend to get through the entrance.

Paoay, in Ilocos Norte, is famous for its magnificent church, which was designated as a UNESCO World Heritage Site in 1993. More...

St. William's Cathedral is from the Spanish era, and is one of the largest in the Philippines. Its foundations were laid in 1612 by Augustinian friars, replacing the original wooden chapel that once stood there. The cathedral has an unusual two-storey façade, supported by two pairs of columns on either side of the arched entrance. To this very day Catholics still use the cathedral for Mass on Sundays and special holy days.

The church ws extensively damaged by a typhoon in 1640, and then by an earthquake in 1706, and then by a fire in 1843. It was restored in 1880. Few churches have withstood so much and survived!

Visit the Malacañang of the North

Malacañang of the North is a grand mansion, in beautiful grounds, which was a birthday gift from first lady, Imelda Marcos, to her husband, Ferdinand, on the occasion of his 60th birthday. This imposing mansion is intricately designed and has a mix of Spanish and Ilocano architecture.

The house looks out over well tended gardens and the beautiful Paoay Lake.

A visit to the Malacañang of the North is a rare opportunity to take a look and experience how life would have been for one of the Philippines most influential families. Read More >>

In the heart of Batac City can be found The Marcos Museum and Mausoleum which was up until recently the resting place of Ferdinand Marcos. The mausoleum contained a glass-encased coffin in which Marco' embalmed body lay on public display, having been brought home from Hawaii in 1993.

The adjoining museum displays fascinating memorabilia of the late president, from his time in the armed forces, to his romance with Imelda, and his term of presidency.

North of Vigan can be found the beautiful beach of Pagudpud located in Ilocos Norte. The strong winds and waves of this beach is often compared to those of Hawaii, which means this beach is frequented by surfers. Pagudpud has been called the Boracay of the north, but without the noise and nightlife!