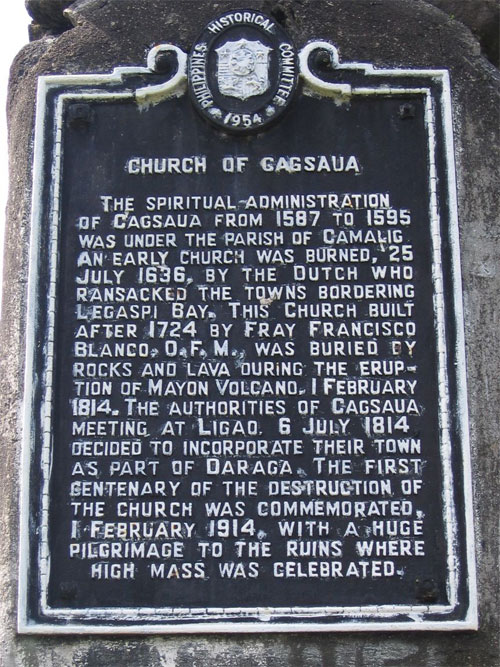 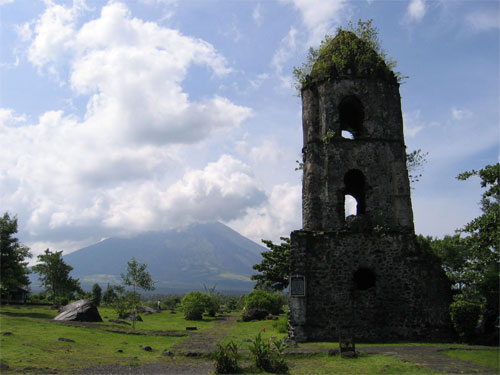 The baroque church of Cagsawa was built by Franciscan friars during the Hispanic occupation of the Philippines in around 1724, to replace an earlier church that had been burned down by Dutch pirates. It is symbolic of the dangers of living in close proximity to the Mayon Volcano.

In 1814, it was destroyed during an eruption of the Mayon Volcano, which killed an estimated 1,200 people in the surrounding areas and buried much of the area under ash, including the town of Cagsawa.

Hundreds of inhabitants sought refuge in the church, but were killed by either pyroclastic flows or lahar. Today, only the belfry and some parts of the convent remain. (Although parts of the facade were still standing after the 1814 eruption, it is believed that these collapsed during earthquakes in the 1950s.)

The Cagsawa Ruins Park is now one of the most popular tourist destinations in Albay province. It is also the site of the Cagsawa Branch of the National Museum of the Philippines. This museum contains photographs of the volcanic eruptions of Mount Mayon as well as other geological and archeological exhibits.

The ruins of Cagsawa were unharmed during the 2006 Super Typhoon Reming, when mudslides and lahar devastated surrounding countryside, killing around 1,266 people.

A visit to Cagsawa Ruins Park is part of our Tour of Albay Province.