It is well worth engaging in a provincial tour of Bicol's Albay Province, visiting the Cagsawa Ruins, Daraga Church, Embarcadero, Lignon Hill, Mt Mayon Rest House and Planetarium, and Tiwi Pottery, as well as the Abaca Handicraft and Pili Shops.

See also the remains of the Padang barangay of Legaspi City, which, during a violent typhoon, was buried in a landslide of ash and giant boulders, washed down from the volcano, as recently as 2006. 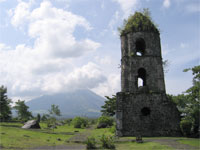 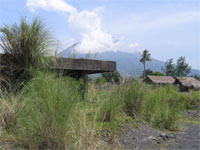 Houses buried in a landslide 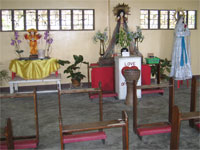 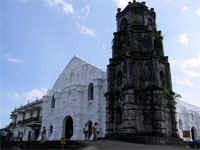 In 1814, Mayon Volcano had a severe eruption, which sent lava flows cascading down its sides.

The townspeople of Cagsawa fled to the church for safety, but sadly perished when it was engulfed in the fiery flows.

Today, one may visit Cagsawa Ruins Park to see the church tower, which remains as a memorial to this tragic event.

Daraga Church is a 17th century baroque church located in Daraga town, west of Legaspi. This church was built in 1873 and served as the main church in Daraga after Cagsawa Church was destroyed by the Mt Mayon Volcano in 1814.

Although the church was bombed during World War II, the archaeological relics of engraved pictures of saints and religious seals on the volcanic rock throughout the church's facade remains today. Daraga Church has been recognised as one of the Philippines' national treasures. More...

The Philippines most active volcano is Mt Mayon, which dominates the skyline near the town of Legaspi, south of Manila in the Bicol region.

This Mt Mayon Volcano is known to have erupted 48 times, and is particularly famous for the fact that is it an almost perfectly symmetrical shape. Its crater is permanently smoldering.

We can organise overnight treks on Mt Mayon. If this is of interest, please enquire.

Other volcanoes you can climb in the region include Mt Bulusan, which is a few miles south of Legaspi in a beautiful area with much wildlife.

The Mt Mayon Rest House was built as the research station of the Philippine Institute of Volcanology and Seismology (PHILVOLCS) and also as a view point for tourists.

From this height, one can admire the majesty of the Mayon Volcano, as well as the panoramic views.

Lignon Hill gives a great view of Legaspi City, the Albay Gulf, Lagaspi airport and Mt Mayon. The daring might like to try the zipline glide! Not many realise that Lignon Hill itself is an extinct volcano and that there is a 40 metre tunnel running underground - once used as a hiding place by the Japanese in World War II.

Tiwi’s pottery has been admired all over the world and one can visit the potteries in the town to see the craftsmen at work. Tiwi is also known for a local dessert called halo-halo, which is well worth a try when in the area. 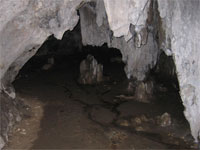 The bicolano word “hoyop” means "blow", and a cool breeze is a feature of these caves. Locals say they were once used as a burial site for their ancestors.

With its unusual formation and massive caverns, with their stalactites and stalagmites, it is well worth a visit.

There are pools of water in the caves, and locals say that when these dry up, it's a sign of an imminent volcanic eruption.